Isaac Guillory (February 27, 1947 – December 31, 2000) was an American folk guitarist.[1] He wrote over 70 songs during a career that spanned 30 years.
Guillory was born at the Guantanamo Bay Naval Base, Cuba, the son of Victoria (Ojalvo) and Easton Joseph Guillory, an American sailor.[1] His maternal grandparents were immigrants from Turkey, who met and married by arrangement only 10 days before they sailed for Cuba. His family was Jewish.[2][3] 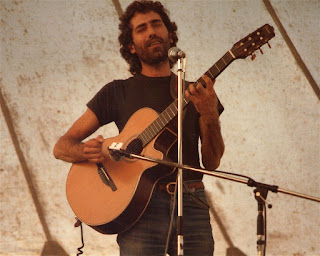 He attended the Conservatory of Music, Havana, where he studied classical piano at the age of six. Guillory's mother, a professional musician, taught him to play guitar. When he was 11, Guillory moved to Tallahassee, Florida. At age 14, he moved again to Gainesville, then finally settled in Palatka, Florida.
By age 14, after enrolling in University of Florida's swimming program, he became an assistant swimming instructor. He was a student at St. Johns River State College, at the time named St. Johns River Junior College, in Palatka. There, he studied the cello and saxophone.
He married twice, first to the English model Tina Thompson (divorced 1990), mother of Jace and British actress and model Sienna Guillory, then in 1993, to Victoria McMillan, mother of Jacob and Ellie.
Guillory died on New Year's Eve 2000. His death was attributed to complications from cancer that had gone undetected for some time.